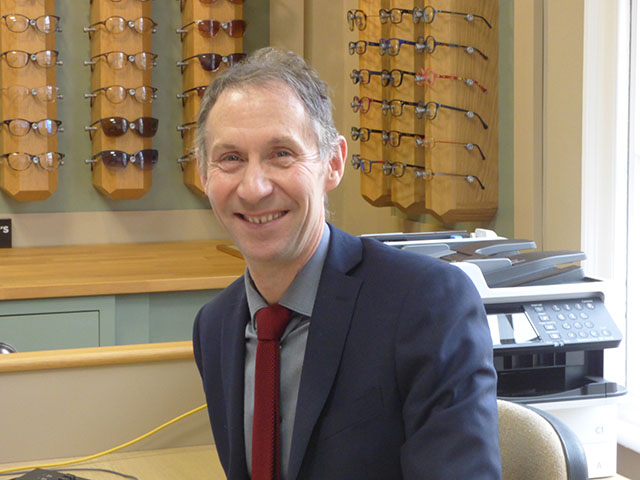 Graduated from The City University, London in 1984 with and Honours degree (2:1) in Optometry & Visual Science. Qualified with College of Optometrists in 1985 following Pre-Registration year at Colchester Hospital. Registered with General Optical Council; number 01-11974. Awarded the Degree of Doctor of Optometry in July 2014 from Aston University, having successfully completed a programme of research and post-graduate learning.

Wide variety of interests and posts in optometry, which presently include:

Examiner and Assessor for College of Optometrists - entails examining Pre-registration optometry graduates in their final college examinations and Assessing Trainees in their practices (since 1996). Also Examination Question Writing - member of the Objective Structured Clinical Examination Development Group for the College (Since 2005).

Teaching - Optics and refraction tuition given to Opthalmologists, and training on a variety of subjects to Pre-Registration and qualified Optometrists. Courses organised and held in the practice since 1999; click here for information. One week courses delivered at Mater Dei Hospital, Malta during October 2011 & October 2016 with lectures including Advanced Retinoscopy techniques, Low Vision services, Spectacle Prescribing and Paediatric Refraction. Numerous other lectures delivered on subjects including optometric examination techniques and referrals, including at the International Conference Centre (Birmingham) in October 2015. Presentation of research findings European Academy of Optometry and Optics, Prague May 2011 and Suffolk LOC Optometry lecture, October 2013. Audio lecture with slides on subject of Direct Referral for Cataract Surgery prepared Oct 2016 and available here. Derek was keynote speaker at University of New South Wales (Sydney, Australia) on 16 November 2016.

Completed an audit of Suffolk Optometrists Referrals in June 2015, a summary of which was published; Optometry Today, June 13 2015, p35-37. Full details regarding this project, as well as referral guidance for Central Serous Chorioretinopathy written May 2019, can be found here. (See bottom of page, under 'Other referral guidance')

Retinoscopy research completed research in June 2014 as part of the Ophthalmic Doctorate Programme via Aston University. This research involved a National and International survey of the Retinoscopy habits of optometrists and a clinical trial comparing accuracy of differing designs of retinoscopes. Published in Optometry in Practice, Vol 12, Issue 2, June 2013, 'Survey of habits and attitudes to retinoscopy by optometrists in the UK'. The thesis abstract and link to the full thesis can be found here.

Peer Support volunteer - providing confidential telephone support to fellow optometrists as part of the Association of Optometrists Peer Support Line (Since inception, May 2017)

Enhanced Service Provider (ESP) for Suffolk NHS - accepting referrals from optometrists and GP's across the county. This involves patients with potential eye problems (detected by optometrists from other practices across the county) being referred to us for Referral Refinement ie making the decision whether an eye clinic is required and, if so, with what degree of urgency.

After 28 years examining eyes in Hadleigh - Derek is now devoting more time to his research interests, peer support and work for the College of Optometrists - click here for further information

Children in Need - we were proud to have sponsored a quiz held in aid of this charity; click here for information.

Employed in private practice in Ipswich (for 5 years) prior to purchasing the Hadleigh business in 1991.

Hobbbies include scriptwriting & playing the trumpet....

Thank you to all who supported a charity gig by the Selion band, with Derek playing trumpet. More than £1500 was raised for the Suffolk Lullaby trust. Click here to see images of the event; password Hadleigh.